After falling to a mediocre record of 8-5 in 2013, the first time since 2005 not to win at least 10 games, the Broncos are eager to prove last season was a fluke. An opening game at Ole Miss is a crucial contest for Boise. A win over the Rebels (currently a projected loss) and the Broncos could go undefeated. Stiff challenges await in conference play though as Fresno State, San Diego State, and Utah State look strong enough to derail the Broncos dreams. An abundance of tough non-conference games may send a message that the conference is weaker when in truth, overall, every team seems improved over 2013. Take a look at the scheduled competition with the power five conferences: Ole Miss, Colorado (2), Boston College, Southern Cal, Nebraska, Utah, Washington, Oregon State (3), Washington State, Arizona (2), Arizona State, North Carolina, Auburn, Minnesota, Tennessee, Wake Forest, Oregon and Michigan State. In addition there are games against 4 “group of five” teams, all contending for their conference crowns, Rice, Arkansas State, Texas-San Antonio, and Northern Illinois. Brigham Young, an independent, but certainly a power five quality team is on the MWC schedule 4 times. Billingsley predicts a record of 2-28 in those contests. Even if Boise State, or any other MWC team goes undefeated, that conference record doesn’t look good to a selection committee. In 2012, for the first time in the 44 year history of the College Football Research Center, the Michigan Wolverines were not the #2 All-Time Top Program in the Billingsley Report. On the strength of 3 National Championships in the last 5 years the Alabama Crimson Tide surged slightly ahead of Michigan last season. In 2013 the Crimson Tide extended their lead over the Wolverines and are now taking aim on overtaking Notre Dame as College Football’s most elite football program. From 1970-1977 the top 3 programs were Notre Dame, Michigan and Ohio State. Alabama leaped the Buckeyes to claim the #3 spot in 1980 after Bear Bryant led Alabama to a remarkable run of great teams in the 1970’s, capped by their 4th Billingsley title in 1979. Notre Dame remains as the #1 overall top rated program in college football history with 268.814 points (down slightly in 2013) to Alabama’s 267.670 (up slightly). Changes in Billingsley’s Top Programs are rare as the data is an average of 144 years of ratings. Should Alabama continue their surge and the Irish falter a few seasons, projections indicate Alabama could overtake Notre Dame in 3 to 4 years. Notre Dame’s dip in performance for 2013 allowed the Tide to continue their march to the Top of Billingsley’s list.

Will parity spell trouble for the MAC?

Six teams, three from each division, will battle for the MAC crown in 2014, with little room separating all six. Bowling Green appears to be a slight favorite, but the Falcons will encounter still competition from within the East Division from Ohio and Buffalo. In the West a very close race is expected between Northern Illinois, Toledo and Ball State, with the division crown likely hinging on the crucial November games of Northern Illinois at Ball State and Northern Illinois hosting Toledo the next week. Is Marshall Poised For Perfection?

The battle for supremacy in Conference USA appears to be a five team race between Marshall and Middle Tennessee in the East and Rice, Texas-San Antonio, and North Texas in the West. The Billingsley projection shows Marshall favored in every game, which will include key games (both at home) against Middle Tennessee and Rice. A loss to the Thundering Herd gives Rice very little wiggle room, but wins over Texas-San Antonio and North Texas (both at home), and barring any upsets along the way in conference play, would still put Rice in a rematch with Marshall for the championship. An undefeated regular season for Marshall (13-0) would most likely land the Thundering Herd in the Top 25. Billingsley projects Marshall to end the regular season at # 16. The Ragin’ Cajuns are loaded and ready to explode onto the National scene. Billingsley’s 2014 Preseason projections find Louisiana Lafayette finishing the season 10-2 with a national ranking closing in on the Top 25 at #27. Losses are projected to be at the hands of Ole Miss on September 13 and Boise State on September 20. Both games are on the road. An upset win over either opponent, coupled with a projected undefeated run in the Sun Belt conference, would assure The Cajuns of that coveted Top 25 ranking, something never achieved by a Sun Belt team. Going undefeated in the conference however, will not be an easy feat. Arkansas State is only a step behind and Louisiana Monroe and Troy are both capable of taking the crown as well. Mark your calendars, the conference title could be decided when Arkansas State visits Louisiana Lafayette on a special Tuesday night edition of college football on October 21. 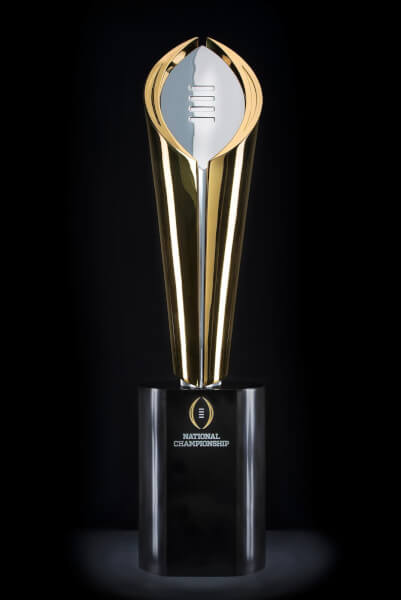 Bill Hancock, Executive Director of the new College Football Playoff announced the rankings dates to release the Top 25 college football teams as seeded by the new Selection Committee. The first release will be announced on Tuesday, October 28, 2014. The Tuesday date is somewhat a throwback to the Golden Age of college football in the 1950’s and 60’s when the Associated Press (AP) and the Coaches Poll (UPI) ran in the Tuesday Editions of newspapers across America. The Selection Committee, comprised of 13 well respected members, will meet weekly in person to analyze data and discuss teams before voting by secret ballot. After the initial release on October 28, subsequent weekly Top 25 Rankings will be released on November4, November 11, November 18, November 25, December 2, and a final vote released on Sunday, December 7. The final vote will announce the Top Four teams which will be selected to play in the inaugural semi-final games of the new playoff format along with the other Bowl Game pairings. The Billingsley Report will continue to release weekly rankings beginning with the first week of the season, on Tuesday, after the games of Labor Day weekend. The rankings for the remainder of the season will be released on Sundays, followed by a weekly review/preview to be posted each Wednesday of the coming season.