The game was everything it was billed to be, and then some, as the Big Ten's # 1 offense prevailed over the Big Ten's #1 defense in spectacular fashion. Ohio State controlled the game from the onset, although Michigan positioned themselves within striking distance again and again until the 4th quarter. The College Football Playoff Committee now has a major decision to make as the Buckeye's 62-39 domination of the Wolverines was so impressive it overshadows the ugly loss at Purdue in mid-season. On the other side of the coin Oklahoma out dueled West Virginia in Morgantown 59-56. Will the Committee forgive the Sooners defensive woes and focus on the fact Oklahoma lost by 3 points on the last play of the game to their greatest rival (Texas 48-45)? We will find out Tuesday night at 6PM CT on ESPN. Keep in mind these will NOT be the final rankings. There are important games left to play. Ohio State faces a solid Northwestern team and Oklahoma has a chance for revenge against Texas in the Red River Part Two game. Both the Buckeyes and the Sooners could easily stumble. Alabama will face Georgia in the SEC Championship. Should the Tide lose, it matters not what the Sooners and Buckeyes do......Alabama will remain in the Top 4 and knock out both Oklahoma and Ohio State. Around the Nation: Central Florida completed an 11-0 regular season with a resounding 38-10 whipping of South Florida, but lost their star QB in the process. The Golden Knights now face surging Memphis in the American Conference Championship Game Saturday. Iowa State rolled up 21 4th quarter points to complete a 42-38 comeback win over Kansas State. It snapped a 10 game losing streak to the Wildcats. The Cyclones Matt Campbell will be a hot commodity for coaching vacancies just like last season and  Iowa State will be lucky if they can hang on to the young dynamic coach. He has completely reversed the losing culture at Iowa State and in time, could lead the Cyclones to a Big 12 Championship and National prominence. Notre Dame came alive in the second half and survived a serious upset bid at the Coliseum, eventually outlasting USC 24-17. Boise State downed high flying Utah State 33-24, snapping the Aggies 10 game winning streak. The Broncos will now face Fresno State for the Mountain West Crown. Washington surprised Washington State 28-15 in an Apple Cup blizzard Friday night. Arizona State shocked hosting Arizona by scoring 20 points in the 4th quarter for an unbelievable 41-40 comeback win. Utah survived an upset at the hands of Brigham Young in the Holy War. BYU jumped out to a 20-0 halftime lead only to watch it slip away as Utah scored 35 points in the second half, prevailing 35-27. Vanderbilt made modern program history as the Commodores beat Tennessee 38-13. It was the 3rd straight win for Vanderbilt over their hated rival Volunteers, something Vandy has not done since winning 6 in a row from 1920-1926 when the Commodores were a nationally prominent program. Vanderbilt has now won 5 of the last 7 in this series. Shocking. And finally......take a deep breath, Texas A&M outlasted LSU, literally, 74-72 in 7 overtimes. The game ended 31-31 in regulation after a stunning reversal of fortune for the Aggies by 1 second being added back to the play clock, allowing A&M to score the tying touchdown. The players were so exhausted they were practically dragging themselves off the field. I hate overtime. There is nothing wrong with two teams being declared equal, and if there were ever two equal teams, Texas A&M and LSU were on this night. 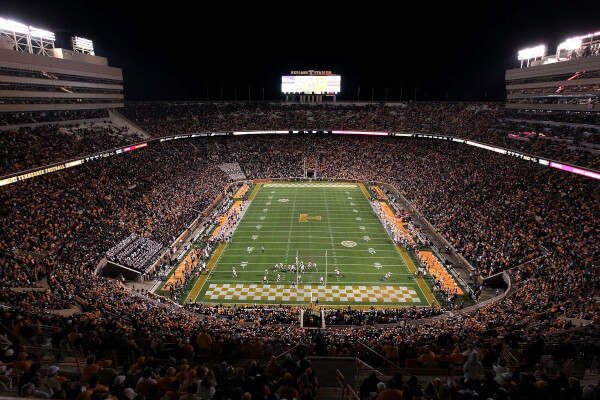